Here is cinematic trailer for Star Wars: Clone Wars Adventures a Star Wars-themed massively multiplayer online game developed by Sony Online Entertainment released on September 15, 2010. The game is part of the Star Wars: The Clone Wars multimedia project. Although the basic game is free to play, premium content, including lightsaber and character customization, can be unlocked through a monthly subscription-based "Jedi" membership. In addition, in-game items can be purchased using Sony Online Entertainment's virtual currency system, Station Cash. On January 24th, 2014, Sony announced that Clone Wars Adventures would be shut down on March 31st of that year.

The in-game world of Clone Wars Adventures is set in the Jedi Temple on Coruscant set between Episodes II and III of Star Wars. Here players can interact with popular Clone Wars characters like Anakin Skywalker, Mace Windu, Yoda, and Obi-Wan Kenobi, and play more than 20 different mini-games including Lightsaber Duel, Republic Defender, a tower defense game, and Speeder Bike Racing. Other mini-games are campaign based on Seasons 3, 4, and 5 from Star Wars the Clone Wars. Players can challenge each other in multi-player games to win Credits. Even though the game is based on the Jedi temple, players can travel to different planets like Ryloth, Umbara, and Carlac when going to the hangar bay.

Players can also interact with other players using the world chat, which allows communication and chatting to a certain distance, or private chat, allowing players to run a conversation with only one other person. Players are also given a buddy list, to add and chat with friends, and an ignore list, to block all communications and requests from that particular player. Additionally, Members can even create player guilds (squads) to allow maximum interaction with friends and access to a private chat room.

All players are given options to play games, build on their own lots, participate in events, and much more. The environment of the game is constantly changing, with weekly updates adding content to the game for players to experience for themselves 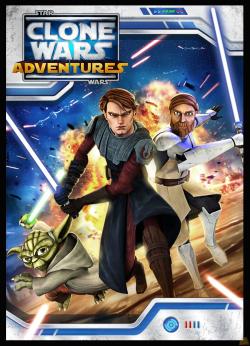 Star Wars Math: Jabba's Game Galaxy was a game released by Lucas Learning in 2000. It was intended for children ages 6 and up, and included a number of math games played against Jabba the Hutt and...
Watch now
Angry Birds Star Wars II

We collected all cinematic trailers and in-game cutscenes from Angry Birds Star Wars II, a video game in the popular Angry Birds app series that was released on iOS, Android and Windows Phone 8 on...
Watch now
Star Wars: Episode I: Battle for Naboo