Followed by is complete cutscene from Battle of Endor DLC.

The game takes place approximately six months after the events of the first game, and a year before Star Wars.

Players control Starkiller's renegade clone, a failure of Darth Vader's attempt to create a perfect secret apprentice. After a vision that Darth Vader will kill him due to his inability to kill a test droid, the clone escapes from captivity on Kamino. After eliminating his stormtrooper captors, Starkiller embarks on a quest to understand his identity and to find his template's love interest from the first game, Juno Eclipse. Meanwhile, Darth Vader has hired Boba Fett to track down Juno Eclipse to lure Starkiller out of hiding. Starkiller rescues Jedi Master Rahm Kota from a gladiatoral arena, and encounters Yoda on Dagobah. After encountering strange visions on Dagobah, Starkiller rushes to Juno's ship, only to arrive just as Boba captures her.

With help from Kota, the Rebels launch an all-out assault on Kamino. Starkiller crashes a ship into the planet's shield, allowing Kota to stage a ground assault, while he goes after Juno. In a confrontation with Vader, Juno is thrown out of a window, crashing to the ground. Starkiller, thinking Juno is dead, attacks Vader viciously, cutting off his hand and defeating him. Kota arrives with his men, and tells Starkiller not to kill Vader: he wants to interrogate the Sith Lord for the Empire's secrets, then put him on trial, and then later execute him. As in the first game, this allows the player to choose either the light path or the dark path:

If the player chooses the dark side, Starkiller raises his saber to kill Vader, only to be stabbed by a shrouded figure who uncloaks behind him. Kota attacks the figure, but is driven back and force pushed over the edge with numerous troops. As the figure removes his cowl, Vader tells the dying Starkiller he lied when he said the cloning process had not been perfected, revealing the figure to be a dark, perfect clone. Starkiller takes one last look at Juno's corpse and dies. Vader instructs the kneeling clone to take Starkiller's ship and kill the remaining leaders of the Rebel Alliance. Downloadable content released in December 2010 expands on this ending, with Starkiller's clone participating in the Battle of Endor in which the remnants of the Rebel Alliance desperately attack Endor in the hopes of destroying the Death Star II. The dark Starkiller is sent to eliminate the threat and kills Ewoks and Rebels (including Han Solo and Chewbacca) in the process. Eventually he finds Princess Leia Organa, who is revealed to be a Jedi, waiting for him and duels her. Starkiller succeeds in killing her. Meanwhile, the Emperor scolds Vader for creating the dark copy of his failed apprentice and subdues him with Force Lightning (calling him Skywalker). The Emperor then orders Captain Sarkli to kill the dark Starkiller.
If the player chooses the light side, Starkiller lowers his blade and allows Kota's men to capture Vader. Starkiller discovers Juno survived the fall, they kiss, and the two travel into hyperspace together aboard the Rogue Shadow, taking Vader prisoner. Starkiller confronts Vader again saying that because he made the conscious choice, of his own free will, to spare Vader's life, he is finally free of the Dark Lord's control. Vader's response is that as long as Juno lives, Vader will always have control over him. Unknown to Starkiller and Juno, Boba Fett pursues in his spacecraft. 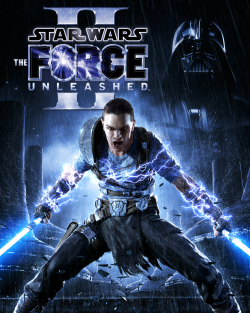 Here is complete E3 Demo for Star Wars: 1313, a video game in development at LucasArts. It was to follow the bounty hunter Boba Fett navigating Level 1313, a subterranean metropolis within the planet...
Watch now
Star Wars: Episode I: Battle for Naboo

Star Wars: Episode I Jedi Power Battles was a console game published for use with the Sony PlayStation and Sega Dreamcast in April of 2000. It inserted players into events in and during Star Wars:...
Watch now