Here are all cutscenes from Star Wars: The Force Unleashed a video game that takes place between the films Star Wars: Episode III Revenge of the Sith and Star Wars: Episode IV A New Hope. Being the centerpiece of the Star Wars: The Force Unleashed multimedia project, the game was released on the Xbox 360, PlayStation 3 and Wii as well as the PlayStation 2, PlayStation Portable, Nintendo DS and the iPhone. Thus, LucasArts worked in conjunction with Industrial Light & Magic, Pixelux Entertainment, and NaturalMotion to create a next-gen Star Wars experience. The game showcases Digital Molecular Matter (DMM), an extremely detailed and realistic material physics engine developed by Pixelux, and euphoria, a realistic bio-mechanical A.I. engine by NaturalMotion.

First video is compliation of all cutscenes from Star Wars: The Force Unleashed Ultimate Sith edition (2009). The Ultimate Sith Edition has a different ending than the original game. Instead of saving Kota, Galen defeats Vader, fatally skewering him with two lightsabers, to replace him at Palpatine's side. His final test is to strike down the incapacitated Kota, but Galen instead attempts to kill the Emperor, who has anticipated his attack and blocks it. Palpatine defeats Galen easily and brings the Rogue Shadow down on top of everyone in the room, killing all but Galen and the Emperor himself. The final scene shows Galen, resting on a table, in a mechanical suit, paralleling Anakin Skywalker's transformation in Revenge of the Sith.

Set in between Star Wars: Episode III – Revenge of the Sith and Star Wars Episode IV: A New Hope, Darth Vader is sent by Emperor Palpatine to destroy a Jedi who survived Palpatine's Jedi purge and is hiding on the Wookiee homeworld, Kashyyyk. The Force Unleashed begins with the player controlling Darth Vader as he searches Kashyyyk for the Jedi. After defeating the Jedi in battle, Vader discovers a child who is strong in the Force and raises him to become his apprentice, unknown to the Emperor for several years. When the apprentice (known in the game as "Starkiller", and whom the player now controls) reaches adulthood, Vader sends him to kill the remaining Jedi as training for his ultimate goal: assassinating the Emperor so Vader and Starkiller can rule the galaxy together.

However, the Emperor discovers Starkiller's existence and forces Vader to kill the apprentice; Vader hurls Starkiller into space, but secretly dispatches droids to retrieve and revive him. Vader sends his apprentice to foster a rebellion among those who resist the Empire, distracting the Emperor so Vader can make his move. Breaking into various Imperial facilities, Starkiller rescues Rogue Shadow pilot Juno Eclipse, Jedi Master Rahm Kota, Princess Leia Organa, and Senator Bail Organa. In the process, Starkiller learns from Kota about the Jedi way, ultimately sparing Jedi apprentice Maris Brood, who had succumbed to corruption by the dark side after Starkiller murdered her master Shaak Ti. Starkiller travels between missions aboard the Rogue Shadow, developing a close relationship with his crew.

At this point, the player chooses to either seek revenge on Vader or save Kota from Emperor Palpatine:

If the player attacks and kills Vader, the Emperor offers to let Starkiller take Vader's place as his apprentice if Starkiller proves himself by killing Kota. Starkiller instead attacks the Emperor, who crushes Starkiller with the Rogue Shadow and kills Kota and all his allies. The story ends with Starkiller's broken body being grafted with armor so he can serve as the Emperor's assassin until Palpatine finds a new apprentice. The game ends with Palpatine assuring Starkiller that he, like Vader, will be cast aside when he finds a new apprentice. The Infinities expansion content builds on this ending.
If the player attacks and defeats Emperor Palpatine, Kota prevents Starkiller from killing Palpatine in hatred. Starkiller dies while absorbing the Emperor's renewed attack, but Kota and the senators escape. The Emperor and Vader look over Starkiller's corpse, concerned that he has become a martyr to inspire the newly formed Rebel Alliance. Senator Organa and the others agree to proceed with their rebellion and Leia decides to use Starkiller's family crest as the Rebellion's symbol. Outside, Juno talks to Kota, who tells her that among Starkiller's dark thoughts, Juno herself was one bright spot that he held onto right until his death. This is the ending depicted in the novelization and this was the canonical ending until Disney rebranded the extended universe into the non-canon "Star Wars Legends". 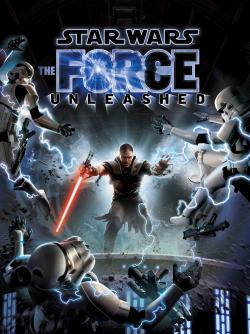 Star Wars: Yoda's Challenge Activity Center was a game made by Lucas Learning in 1999. The premise was that after the Battle of Naboo, many things were left to accomplish. You were a promising kid...
Watch now
Star Wars: Force Commander

Watch all cutscenes from Star Wars: Force Commander a real-time strategy (RTS) computer game released for the PC in March 2000. Plot The game interweaves its story through the events of Episodes IV...
Watch now
Star Wars: Episode I Racer