Star Wars: Yoda's Challenge Activity Center was a game made by Lucas Learning in 1999. The premise was that after the Battle of Naboo, many things were left to accomplish. You were a promising kid brought to Yoda by Obi-Wan Kenobi, aiding in a quest to complete the tasks.

The game features six activities. Each mini-game came with four levels: green, yellow, orange and red. Green was the easiest, and red was the most difficult.

Race at Theed
The Victory Races of Naboo were for peace on the planet between the Naboo and the Gungans. You are supposed to plot the best path for whoever you were playing for.

Trap Droids
There are many battle droids still on Naboo, destroying the Sacred Forest. You are supposed to help Jar Jar Binks trap the droids in a series of traps, triggered by the correct beat on bongos.

Program C-3PO
Anakin Skywalker's droid, C-3PO, is still on Tatooine. He is going to be programmed many stories, sentence by sentence.

Explore Gungan Caves
Four ancient relics were lost and locked behind doors. You have to navigate the Gungan Caves to find the 10 jewel keys that open each door and retrieve the relic.

Make Anakin's songbook
After Anakin Skywalker left Tatooine, some people thought it was a good idea to give him a songbook to remember the place. You, with the aid of a Bith band, will input each song for him. 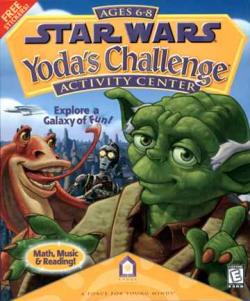 Star Wars: Empire at War, (sometimes abbreviated to simply EaW), is a real-time strategy (RTS) game that takes place in the Star Wars universe. Promising to end the perceived mediocrity of past Star...
Watch now
Star Wars: Episode I Racer

This is alternate ending of Star Wars Episode III: Revenge of the Sith where Anakin kills Obi-Wan. Game was released in 2005 and is based on the movie of the same name. It centers around Obi-Wan...
Watch now