Original introduction and all cutscenes from the Collectors Edition of the LucasArts game TIE FIGHTER.

UPDATE 8.2.2016 - Added Secret Order cutscenes. Still missing last two which I'll update the video with when I get them (namely: Emperor's Voice and Emperor's Reach).

Star Wars: TIE Fighter is the sequel to Star Wars: X-Wing and the first Star Wars video game ever set on the side of the Galactic Empire.
The game begins soon after the Battle of Hoth, and the expansions lead up to the Battle of Endor. The player assumes the role of a rookie TIE pilot, whose name in the player's guide is given as Maarek Stele. Since this is the first game ever on the side of the Galactic Empire, the position of an Imperial main character could estrange some players; however the pilot's role becomes a bit sympathetic since he lives in fear of the punishment of Darth Vader and other superiors, and later the player is directed against other odds.

Here the Empire is portrayed as a force for peace and order, while the Rebel Alliance is portrayed as a cause of anarchy and chaos. While the Rebels are one of the biggest threats in the initial stages of the game, many missions also deal with the elimination of pirates and other criminals, civil wars, traitor Imperials, and others, in order to maintain peace in the galaxy.

Similar to X-Wing, there is a concourse which gives the player several options. They can examine craft in the tech room, go to the combat simulation chamber to practice training missions or replay successful missions, view gun camera footage in the film room (with the option of "entering" the mission at any point), transfer to another sector (campaign) or review successful campaign cutscenes, switch pilots, and fly the next upcoming mission.

Though an Imperial Star Destroyer is frequently depicted as the headquarters of a sector or star system, the concourse which is a circular atrium likely represents the interior of an XQ Platform. According to The Stele Chronicles, the concourse is located aboard the Star Destroyer Vengeance.

As mentioned, it was the first Star Wars game ever on the side of the Galactic Empire; interestingly, it is also so far the only game that progresses wholly from the Empire's perspective, while all other subsequent games that offer control of the Empire, give it only as an optional choice. Also, it is the only game whose opening crawl does not feature the Star Wars Main Title, but instead it features a modified version of the Imperial March. 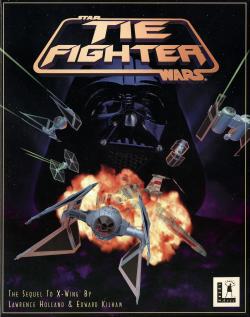 Here is intro and all the cutscenes you get at the end of a campaign (or "tour") of Star Wars: X-Wing (1993) (Collectors Edition). Plot X-Wing is unique in the corpus of Star Wars in that it features...
Watch now
Star Wars Battlefront: Elite Squadron

Here are all cutscenes from Star Wars Battlefront: Elite Squadron the fourth installment in the Battlefront series released for Nintendo DS and PSP on November 3, 2009. Plot Story chronicles the...
Watch now