The opening cutscene to the video game X-wing Alliance. It plays before the game's main menu appears. After the Imperials attack the Rebel base on Hoth, the freighter Otana flees and attempts repairs at the nearby Twin Suns service platform.

The 2nd cutscene: Azzameen family of merchants pay the ultimate price for helping out the Rebel Alliance as the Empire seize control of their station and attempt to imprison them for treachery. The 3 remaining members get in their ships consisting of the Otana (YT-2000 Corellian Transport) The Selu and Andrasta (YT-1300 Corellian Transport identical to the Millennium Falcon and Slave I) and flee. The Andrasta provides cover and destroys some TIE’s as they all make the jump to hyperspace and meet up with a Rebel fleet to seek refuge.

The 3rd cutscene from the video game Star Wars X-wing Alliance. This one plays just after "Battle 1, Mission #7: Destroy Imperial Sensor Net." The Rebels escape after destroying the Imperial sensor net, and the ISD Corrupter must return home.

The 4th cutscene from the video game X-wing Alliance. This one plays just after "Battle 2, Mission #6: Destroy Imperial Research Facility." Here Admiral Zaarin discusses the continuation of the prototype TIE project, despite the head researcher's death. The prototype TIEs are never seen in the game after this.

The 5th cutscene from the video gamme X-wing Alliance. This one plays just before "Battle 3, Mission #7: Scramble!" An Imperial spy steals shuttle AA-23 in an attempt to give vital information to the Empire. A team is dispatched to stop him.

Star Wars: X-Wing Alliance, or XWA, is the fourth game in the X-Wing computer game series, and is considered by most fans to be the sequel to Star Wars: TIE Fighter, and therefore the third part of a progressive trilogy. Though the multiplayer-focused Star Wars: X-Wing vs. TIE Fighter was the third game released in the series, its lack of story-driven campaigns was decried by fans.

X-Wing Alliance presents the story of Ace Azzameen, the youngest member of the Azzameen family, a neutral family of traders. The player assumes Ace's place in all of the missions in the game.

Although the game is considered a sequel, it takes place simultaneously with Star Wars: TIE Fighter, showing the whereabouts of the Rebellion during those events: it starts a little after the Battle of Hoth, crosses over with the Shadows of the Empire and ends with the Battle of Endor (TIE Fighter's expansion ends right before Endor). 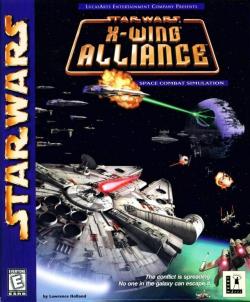 All cutscenes from LEGO Star Wars: The Complete Saga, a video game released by LucasArts on November 6, 2007. It is based on the Star Wars-themed toy line by the LEGO Group, and is a combination of...
Watch now
Star Wars: Tiny Death Star